When I was asked to write this devotional, I had no idea what to say that might be inspirational or spiritual or meaningful…so I thought about politely declining. I was convinced to write something that was important to me. I looked back on how I spent my time in recent weeks and the word service clearly stood out to me.

The Oxford Dictionary Definition of service has many meanings including:

1.   [mass noun]  The action of helping or doing work for someone.
‘millions are involved in voluntary service’

4.   A ceremony of religious worship according to a prescribed form.
‘a funeral service’

It struck me that the many meanings and definitions of service included doing for others, being in the Armed Forces, and acts of worship.

On Thursdays, the Grumpy Old Men (and Women) of Perdido (GOM) meet at PBUMC to pray, have a Bible lesson, and discuss the weekly and ongoing projects that they perform in service to our community. What particularly strikes me is that, almost without exception, on any given Thursday retired members of the Army, Navy, Air Force, Marines and Coast Guard are in attendance, along with retired civilian engineers, lawyers, farmers, tradesman, and businessmen of all types. What a group!

Service to our nation and the freedoms it protects is a very strong feeling when you serve in our country’s Armed Forces. It becomes embedded into the very fabric of who we are. This feeling of service and being a part of something larger than ourselves does not ‘go quietly into the night when we retire’, and it is not limited to the one wearing the uniform – spouses and children and other family members become just as committed to service with all the sacrifices they are called upon to make during a 20 or 30-year career.

The GOM and PBUMC have afforded me, and many other fellow retired military members, a natural transition to continue a life of service – service to our God, our country, and our community. When you look around the room at the diversity of skills and experience and selfless sacrifice gathered, you can’t help but be touched and know that God is there among us. How truly blessed I am to be free to serve and to worship our God. 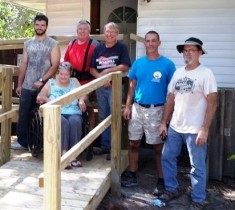 Many who know me, know what a huge M*A*S*H fan I am. One episode has stuck with me for 35 years since I saw it as a kid. Hawkeye and BJ were busting a chopper pilot who was using Korean kids to collect brass shells to make souvenirs. A few kids were injured and they pulled the plug on the operation. The pilot told Hawkeye and BJ that they were just fooling themselves, that there were 10 other guys doing what he did and they weren’t changing the world. Hawkeye and BJ responded, acknowledging that to be true, but they were going to start by changing their little corner of the world.

God has blessed me with so many things, and while I don’t think changing the world is within my skill set, changing my little corner of it here in Perdido is! Thank you to the GOM and all the other groups at PBUMC who make a difference in our community in His name.

One thought on “Service”